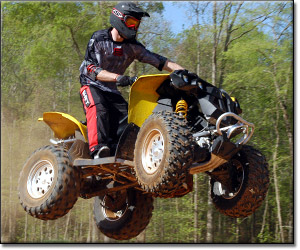 Under the Renegade’s sporty bodywork resides the awesome 62 horsepower V-twin 800 with EFI pirated from the Outlander 800 HO. It’s bolted to a near identical SST spar frame claiming myriad weight reductions. Can you believe this beast is 42 pounds lighter than the 800 Outlander?

Clearly, a large chunk of the weight loss comes from the cut, shaved and totally redesigned bodywork sheathing this stealthy fighter. Oh yeah, chopping out the front and rear racks saves pounds, too.

Up front, the redesigned “RS” front end uses many of the 800 Outlander’s components with a few extra tweaks to deliver sportier handling and an increase in wheel travel to 9 inches. Gas shocks and a slightly tweaked lower A-frame mounting angle are the biggest changes on the chassis itself. After riding it, we felt the front end of the Renegade was far superior to the Outlander.

Power gets to the ground using the familiar Visco-Lok drive train via all-new rolled outer and inner reinforced billet aluminum rims. These wheels are incredibly strong, very light and, most importantly, seriously cool looking. The new rims are wrapped in ITP Holeshot ATR radials and deliver all-round performance in both mud and wide open trail surfaces.

Standard features include a cool new Renegade-specific LCD gauge pack, DESS security key and a quad pack of 60-watt projector beams up front. The Renegade utilizes the solid components of the Outlander, its insane horsepower and a good hit of Pure Sport adrenaline to create an off-road monster that’s ready for whatever you want to throw down.

Dirt Trax Onlinehttps://www.atvmag.com
Check back frequently for new content and follow us on social media!
Previous articleWill The Suzuki Vinson Get IRS?
Next articleGust Closes in on Top Spot after Mill Creek