Borich and Suzuki Dominate The Triton 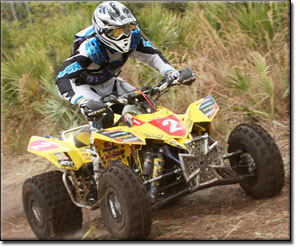 Suzuki rider Chris Borich dominated the first round of the GNCC Championship series at the Kempfer Ranch in Melbourne, Florida. Known as “The Triton” this event is a tough test of man and machine.

Borich, from Sunbury PA, rode his Suzuki QuadRacer R450 to a commanding victory, pulling to a nearly two minute margin of victory at the checkers. The new track was a real challenge to all riders and Borich felt that his QuadRacer helped make the winning difference.

“The track was much rougher than in the past,” the 25 year old Borich said after the event. “Palmetto roots everywhere, heat, holes, trees, it was a tough one. I love this Suzuki. It’s my first race on it, but as soon as I got on the bike I was comfortable.”

The race went well for Borich. He was jostled a bit off the start then steadily picked off riders, and passed into the lead on lap two. “The early leaders got tired pretty quickly and I was able to get past them. Once I got into the lead – I just took off.”

Asked how he rated the overall performance of the Suzuki, seven year Pro-class veteran Borich said, “Awesome! The best bike I’ve been on. I’ve ridden other brands, but this thing just blows them away. The Suzuki has a really low center of gravity, is super fast and responsive, the front end is great… the whole package makes it easy to go fast on. Those other guys were getting beat up by the track. I had an advantage with the QuadRacer.”

Borich’s plan is to take the Championship one race at a time. Sunday’s result was obviously just part of the plan. The series continues next weekend in Washington, GA.