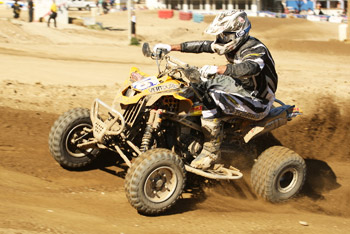 Can-Am X-Team racer and Québec native Richard Pelchat pulled the second-moto holeshot and never looked back as he dominated the rest of the field to win the overall race and championship at Ste-Julie near Montréal.

“Spectacular is the first word that comes to mind after going first and second in the Canadian championship race this year,” said Del Bohlman, Racing Manager for Can-Am ATVs at BRP. “Everyone at BRP has worked extremely hard developing the Can-Am DS 450 race program and to see Richard lift the championship plate rewards the hard work everyone from the factory to the racers has put in this season.”

This championship is especially poignant for Pelchat as he overcame a mid-season injury to keep his points lead heading into the final race. He went into the last race of the season with a 16-point lead on Québec’s own Ouellete. Both riders had a chance at the championship, but it was Pelchat that was victorious.

“It has been a big year for me; from January on we were testing, training and racing,” commented Richard Pelchat on his championship season. “In the end it was all worth it and I can say that the Can-Am DS 450 made my job easier; it is so powerful and handles really great. Thanks to all my sponsors for believing in me and making this championship possible.”

This is the second overall championship for the DS 450, the other being Team Motoworks / Can-Am racer Josh Frederick in the 2008 WORCS championship.

Dirt Trax Onlinehttps://www.atvmag.com
Check back frequently for new content and follow us on social media!
Previous articleBallance, Cecco and Ockerman Dominate at Ironman
Next articleTJD Now Distributed By Tucker Rocky