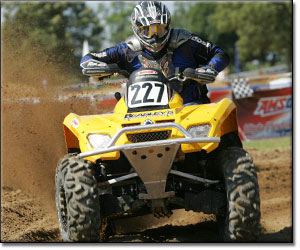 Despite only competing in 9 of 10 events on the start-up circuit, racers on stock Can-Am OutlanderTM 650 H.O. EFI 4×4 ATVs won four races  the most of any manufacturer, and 12 of 30 podium spots  twice as many as the closest competitor.

This was a great first season for Can-Am and the WPSA, said Yves Leduc, Vice-President, General Manager, Snowmobiles, Watercraft, Sport boats and ATVs, BRP. With three different riders winning races and dominating the holeshot awards, we showed ATV enthusiasts that Can-Am ATVs and performance are synonymous.

Quadterrain races were contested on Can-Am Outlander recreation-utility ATVs. Each Outlander model has the most powerful engine in its class and features unique and innovative features, like the Torsional Trailing arm  Independent (TTI) rear suspension.