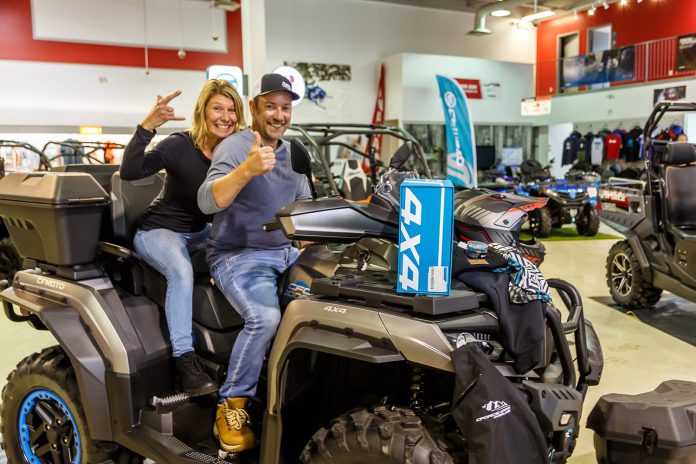 On September 30th, CFMOTO Canada made someone very happy by giving Emmanuel Landry, from Carleton-sur-mer, a CFORCE 1000 Overland. Directly from the CFMOTO Fox Marine Sport dealer in Gaspé, Emmanuel took possession of his vehicle with his partner Véronique.

CFORCE 1000 Overland 2021 is the newest addition to CFMOTO Canada’s family of recreational vehicles. Including a passenger seat, an integrated windshield, front and rear bumpers as well as two detachable trunks, it stands out from all other ATVs in its category by the multitude of accessories included with the purchase.

The happy couple took advantage of this day to travel the magnificent trails of the Gaspé region aboard their new CFMOTO vehicle with the members of the Fox Marine Sport team as well as those of CFMOTO Canada and Raven Médias.

About CFMOTO Canada – Founded in 1989, CFMOTO designs and manufactures recreational sports vehicles. Its annual production capacity is 800,000 engines and 600,000 vehicles distributed in more than 70 countries.