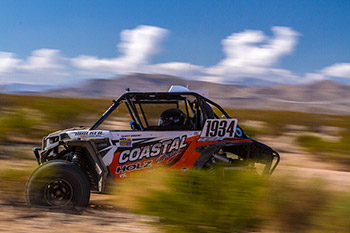 Best in the Desert’s Henderson 250 is the last BITD race of the year and would determine who would take the UTV championship this year. On the ATV side, Team UXC Racing would line up to make history with their Scrambler XP 1000 EPS.

Jagged X’s Brandon Schueler in the No. 1919 RZR XP 1000 had the championship on the line with a small point cushion of just 13 points. Given the Henderson 250 is a “double points” race, anything could happen.

When the dust cleared, Schueler would finish second giving him enough points for his second consecutive BITD Championship and the sixth over his career! Schueler would get edged out in the race by Scott Kiger and Mark Holz in the No. 1934 Coastal Racing RZR XP 1000 who would finish the series in a respectable second place.

Jagged X’s Craig Scanlon in the No. 1931 RZR XP 1000 would come into the race in sixth place with a very-close points race separating third through sixth place. Scanlon would take a hard-fought third in the race to catapult him into a third place finish in the series, giving RZR a 1-2-3 finish for the 2014 race season.

On the ATV side, Team UXC Racing would head into the race ahead by one point and would need the win to make history. Michael Swift started the race on the Scrambler XP 1000 EPS and battled with the competition in foggy early morning conditions.

Swift would set a blistering pace and have a six-minute lead when he handed the Scrambler off to Don Higbee. Higbee, who would continue to pull away from the second place ATV, would take the win and help Team UXC Racing make history, once again, by showing the Scrambler’s capability against conventional sport quads in desert racing.

The BITD Expert Class Championship would be the third championship for Team UXC Racing. In November, the team would finish the Baja 1000 to take the SCORE championship, and team member Chris Robinson also would win the TORN Championship aboard the Scrambler XP 1000 EPS.

“Polaris would like to congratulate our Best in the Desert teams for an incredible 2014 race season,” said Donna Beadle, off-road race team manager for Polaris. “Along with RZR continuing to dominate in the UTV Pro class, it was awesome to see first-year Team UXC Racing show both the ability and durability of the Scrambler XP 1000. We are looking forward to 2015!”

Polaris is a recognized leader in the powersports industry with annual 2013 sales of $3.8 billion. Polaris designs, engineers, manufactures and markets innovative, high quality off-road vehicles, including all-terrain vehicles (ATVs) and the Polaris RANGER and RZR side-by-side vehicles, snowmobiles, motorcycles and on-road electric/hybrid powered vehicles. Polaris is among the global sales leaders for both snowmobiles and off-road vehicles and has established a presence in the heavyweight cruiser and touring motorcycle market with the Victory and Indian Motorcycle brands. Additionally, Polaris continues to invest in the global on-road small electric/hybrid powered vehicle industry with Global Electric Motorcars (GEM), Goupil Industrie SA, Aixam Mega S.A.S., and internally developed vehicles. Polaris enhances the riding experience with a complete line of Polaris Engineered parts, accessories and apparel, Klim branded apparel and ORV accessories under the Kolpin and Cycle Country brands. Polaris Industries Inc. trades on the New York Stock Exchange under the symbol PII, and the Company is included in the S&P Mid-Cap 400 stock price index.

Information about the complete line of Polaris products, apparel and vehicle accessories are available from authorized Polaris dealers or anytime at polaris.com.