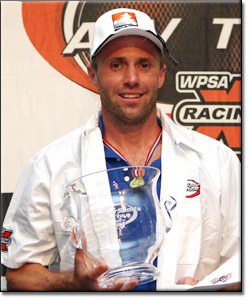 It all came down to the last lap in the last race of the WPSA Power Sports ATV Series Championship. The Super Quad 450 Pro Division had been a four-way contest between Gust, Jones, Natalie and Wimmer until injuries took out Jones and Natalie.

But with the ESPN cameras capturing every nail-biting moment, it was just a couple of quad lengths that separated the two would-be champions.?

Coming out of Round Eight, Gust was just hanging on to the lead by one point. This was a make it or break it weekend for Team Yoshimura Suzuki. Saturday’s race found Gust trailing Wimmer throughout the race and at the checkers two points down.

Sunday morning dawned and the two nervous dirt gladiators won their first heats. Still two points down, Gust and Wimmer had a dress rehearsal for the main event when WPSA matched them up for the second heat race. Gust took the win with Wimmer in second – one point down. Whichever rider won the main event would walk away with the crown.

For Gust and Wimmer the afternoon was torturous as they had to survive the time warp until the main event.? Doug commented on this later: “Dustin mentioned how nervous he was, but even with all my experience, I was really nervous, too.”

The race began in true Hollywood tradition – the 19 year old up and comer vs the 39 year old tried and true veteran. “I was racing quads before Dustin was even born,” Gust quipped after the race. With at least a dozen cameras zoomed in, Gust and Wimmer swapped leads thoughout the entire race in one single lap there were three instances of one overtaking the other. The fans cheered as they watched a race that turned from man vs boy into man vs man. The win came down to only a few quad lengths with Gust coming out victorious.

“This Championship is one of the sweetest ever,” Gust said later at the awards ceremony. “Dustin is a great competitor and I just happened to come out on top today. It’s safe to say though that Dustin Wimmer has arrived.”

At the awards ceremony, Gust dedicated his win to teammate Jeremiah Jones. The announcer was able to put through a live cell phone call from Jones at the Louisville, KY rehabilitation facility who congratulated Doug on his win. With Jeremiah’s help, Suzuki received the WPSA Manufacturer’s Award for 2006.

“I am really proud of both Jeremiah and Doug this year,” Team Manager Wayne Hinson boasted.? “They are two fine men with a lot of talent and heart.”

Yoshimura support rider Russell Schumaker was also named Amateur Athlete of the Year and received the “A” Class Championship as well as runner up in the Pro-Am Division. Schumaker is another up and coming rider who will be a force to be reckoned with in the future.