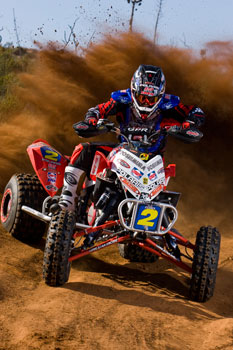 Friday before the race, all competitors were allowed to ride mountain bikes on the track to site the course before race day.

Eichner took advantage of the site-lap and returned to the Polaris / Lone Star / Eichner Racing pit with a smile stating this was the perfect track for his style of riding and the capabilities of his powerful Polaris Outlaw 450 MXR with enhanced power and exhaust from Yoshimura, numerous aftermarket components from Lone Star Racing, MAXXIS Tires, Rath Racing and GPR Stabilizer.

Eichner said, “The track was going to be fast, fast, fast and included a spectacular 70 ft. table top jump followed by a 90 foot double jump and of course the legendary Lake Elsinore water jump.”

Eichner couldn’t wait to get at it as the flag dropped on Saturday morning at 11:30 a.m. It was a dusty start, but it was only a short time before you could see Eichner’s classic riding style aboard the Polaris leaving site of the crowd with a large lead.

Eichner and the Polaris Outlaw 450 MXR ran a flawless 45-minute race, mastered the jumps and turned on the gas on the fast open style track. With what appeared to be an untouchable lead, Eichner took the time to give fans “high-fives” as they jumped out of the cheering sections with their arms waving.

Clearly the crowd favorite, Eichner made this victory his ninth Pro win at the Legendary Lake Elsinore Grand Prix, but a first for Eichner aboard his Polaris Outlaw 450 MXR.