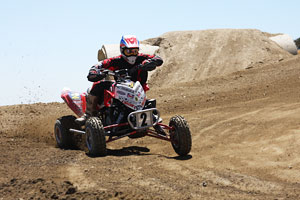 Team Captain, Doug Eichner, who entered WORCS Round 6 with the misfortune of a broken toe and injured shoulder, demonstrated the true grit he is known for as he took on the demanding 90-minute race.

Despite injury, Eichner and his Outlaw 450 MXR with enhanced power from Yoshimura R&D of America Inc., FOX Racing Shox and MAXXIS tires turned in a commendable fifth place finish in the Pro Main Event.

Additionally, Eichner, in his Polaris RANGER RZR, took on the Side-by-Side event which proved to be a spectator favorite and continues to produce record numbers of competitive units in this division.

Eichner captured the lead on the first lap and had the crowd screaming as he and his Co-Pilot, Larry Heidler, were the only unit to take on the large log jump in the motocross section of the course.

Eichner held a commanding lead and then made a sudden stop to allow a safety inspection of his Co-Pilot’s racing harness. Back under way, Eichner charged hard to regain the lead and finished the race with a sizable lead and impressive first place finish. Eichner continues to lead this event in the overall point standings.

Pro team rider, John Shafe, returned to WORCS racing after taking a couple of months to recover from wrist surgery. Shafe finished the Pro Main Event in the top 10 aboard the Outlaw 450 MXR. Shafe is training hard to return in top form for WORCS round 7.

“I knew this race would be a challenge for us,” stated Eichner. “With John Shafe returning after his wrist surgery and my own injuries to contend with, the rough track and tight turns did present a challenge. The Polaris machines worked awesome and I was pleased that we could press on for the sake of our sponsors.”