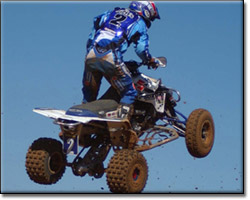 Team Suzuki/Yoshimura rider Jeremiah Jones is busy planning a strong comeback after a disappointing start to the GNC 2006 Series. Rounds one and two were plagued by impact-induced structural damage that resulted in some point killing DNF’s.

Undaunted by the standings, the amicable Kentuckian is pretty happy and optimistic about the rest of the season. “We’ve had some bad luck these first two races. Now it’s just getting back on track and staying focused. I just need to put those races behind me and go forward.”

Not much could get this rider down right now. He’s a new husband and dad and couldn’t be prouder of his brand new 2½ month old son Jeremiah Nathaniel Jones. Jeremiah gained a coach as well as a beautiful bride when he married Jamie as she has some impressive racing credentials as well. “Jamie knows all about what is going on and what I should be doing. She gives me an incredible amount of support,” Jones says with a smile.

The Joneses have purchased a motorhome to travel and live in during the season. “It’s fun,” Jeremiah explains. “We bought the motorhome so we don’t have to be apart. We travel, have fun, ride and get ready for the next race.”

Jones knows all about the value of ATV riding as a family affair. He began riding at seven and started racing at 15. His parents financially backed his decision to become a pro racer and his dad tweaked wrenches for him until he signed with Team Suzuki/Yoshimura. “If it weren’t for my father and mother to set the standard, I wouldn’t be where I am,” Jeremiah reflects. “I was very fortunate to get what I’ve got, but I’ve worked my butt off too!”

Jeremiah is definitely working his butt of right now. He and teammate Doug Gust are practicing together near Gainesville getting ready for the race next weekend at Gatorback Cycle Park in Gainesville, FL.

Although they practice side by side, their riding styles are completely opposite. Jones describes Gust’s style: “Doug is a really calm, smooth, steady rider. He runs a good steady pace throughout the whole race and likes to drive the corners. I’m just wild on the track and go as fast as I can.”

Team Manager Wayne Hinson agrees laughingly. “Jones is a like a gunslinger out there! Ever since I saw him win at Unadilla last summer, I knew you just had to get him out front and watch him take off with the same kind of intensity and fire as a Wild West Gunslinger.”

Either way you ride it – smooth and precise or wild and wide open – the new team bike is built to win. The all-new 2006 Suzuki QuadRacer LT-R450 is an exciting racing machine. Now that the riders have a month of practice in, they are both really excited about it. “I think the bike is awesome,” Jones says. “It’s a true all-out performance race bike. It’s fun to ride and has a lot of really great characteristics.”

So as we approach Gatorback, Team Suzuki/Yoshimura rider Jeremiah “The Gunfighter” Jones is calm and cool. He has that same look in his eyes that you see in those old time Westerns right before someone pulls the trigger. No matter who wins and what happens, there is no question that Jones will be smiling at the end of the day. That’s just the kind of guy he is.