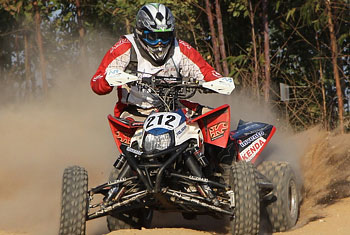 The European Championship of Bajas ended prematurely with a round in Veszprem in Hungary after cancelation of the last round in Sardinia -Italy.

Because of this, Joao Nazareth was unable to retrieve off the slight difference in the classification and finished once again second in the category Q4 – Quads with engines over 450cc.

However, the rider from Santiago do Cacém on a Polaris Outlaw 525S has not stopped and in the penultimate round of the Portuguese Championship of All-terrain in Castelo Branco finished in second place that puts you in the same position in the championship.

Polaris NZR-Squad with the support of Polaris, NZR-Shop, AR Telecom, Drenaline, Putoline, Kenda, Alpinestars, AGV, Speedfreak, Invento, AGV, Pamoto, Discoteca Alexander’s, Artrax, R-Custom and Acrialbi will be back in action for the first round of the Portuguese Trophy Cross-country with the rider Humberto Santos in mid-October.