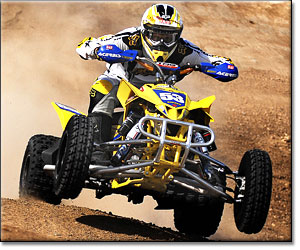 After 11 grueling rounds – almost one every month – Kory is top dog in the highly competitive west coast series that brings out all the top contenders from California, Washington, Oregon, Utah, Nevada, Arizona and beyond.

“This series is different than the WPSA or GNC,” Ellis said. “Those are true national race series that are based in the eastern and central U.S. They draw the Best of the Best, but the ITP QuadCross is definitely the Best of the West.”

The competition was tough and it was not a cakewalk to defeat riders of the caliber of Dustin Wimmer, Dustin Nelson, Keith Little, Cyle Chislock and Josh Creamer. That said, Kory did walk away with 5 top podium spots.

Things got a little dicey for Kory during the last two rounds. A broken foot slowed him down to a pair of third place positions.

For Kory, the perfect match for his blazing speed was a Yoshimura-equipped Suzuki LT-R450 QuadRacer. Similar to what Team Rockstar, Suzuki/Yoshimura/Pro Taper riders Gust, Wimmer and Wienen ride, Kory was able to customize his quad to best suit his riding ability.

So what can we expect to see from this 31 year old from Marietta CA in ’08? Well, it looks like he’s taking a desk job and hanging up his A-arms for good. He’ll be more active with the team and just riding for fun.

“I’ve been racing in National events for 12 years. It’s a lot of hard work and a lot of traveling. I’m really enjoying my job with Yoshimura and working with the race team. It’s time to just enjoy it all,” Kory said.

“We couldn’t be more proud of Kory and this achievement,” Yoshimura Vice President Brant Russell commented. “It’s been really fun to watch Kory this year take on this series and pound out the wins. He deserves to go out a champion, because that is what he is.”