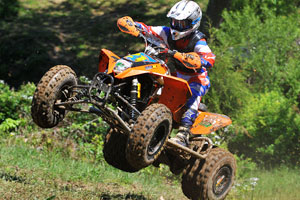 KTM ATV regional support rider David Crane couldn’t be stopped at the classic Iowa OMA Round 4 venue on his 450 XC as he handled nasty weather and the competition for a commanding Pro class victory and overall.

Thirty minutes before the start, the skies opened up and a heavy downpour quickly turned dry and dusty conditions into slick mud.

“It started to rain on the line and the race quickly became one of survival,” Crane said. “It was pretty sticky, but the KTM ran great and it hooks up so well in muddy conditions.”

Crane had a decent start and worked his way through traffic and the rain during the first lap. But, by the beginning of the second lap, Crane pulled his 450 XC into the lead just as it stopped raining and never looked back

“I pulled into the lead and checked out from there,” Crane said. “The KTM gets traction better than anything I’ve ever been on.”

By the end of the seven-lap race, Crane had amassed nearly a seven-minute lead and his first career OMA overall victory. “I hope to get in the points lead and stretch it out from there,” Crane said. Currently, Crane sits in second place overall and trails the Pro class leader by just four points.

Now Crane is preparing for Round 8 of the GNCC series before he makes the trip to Michigan June 28 for Round 5 of the OMA series.