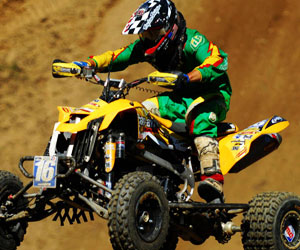 Team Epic’s Jeremy Lawson was on top of his game all weekend taking 2nd Overall and his first podium of the 2008 season at Round 5 of the AMA/ATVA ATV Championship series at High Point in Mt. Morris, PA.

The #16 of Lawson got a good start in Moto 1 and rode to  a 2nd place finish behind points leader Dustin Wimmer.

The #49 of Sage Baker rode to a 12th place finish while Gee had mechanical problems from an earlier incenident in practice and finished 18th in Moto one.

For Moto 2 Lawson had to avoid another rider on the start putting him back to 10th coming out of the first corner.

Feeling strong, Lawson started picking off the riders in front of him until he had moved into 2nd place behind Joe Byrd.

Lawson moved in on Byrd but had to settle with a 2nd place finish. Greg Gee finished 11th in Moto 2 and Sage Baker finished 12th

Overall finishes for the weekend were Lawson 2nd, Baker 11th, and Greg Gee 16th. Team Epic Jeremy Lawson said Everything clicked this weekend. We have been working hard. . This moved Lawson into 7th place in the season standings.

Team Epic is back to the shop in Illinois preparing for Round 6 of the ATVA National series, to be held in New Berlin, NY on June 7-8, 2008.

Dirt Trax Onlinehttps://atvmag.com
Check back frequently for new content and follow us on social media!
Previous articleButler Tears it Up at WORCS Round 5
Next articleAMA Pro ATV Motocross Championship Update