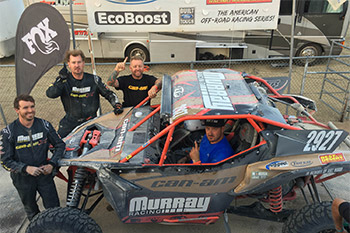 “It’s impressive to earn such a defining victory in our first official race with the new Maverick X3. The Murray Racing team was outstanding in the Nevada desert and their class victories continue to prove Can-Am is a clear leader in performance side-by-side vehicles,” said Jeff Leclerc, Racing Project Leader, Can-Am. “Our BITD racing teams started with the most race-ready platform in history, with the Can-Am Maverick X3. Although they added the necessary safety and racing equipment, the new X3 race builds remained mostly stock.”

Jason earned a statement-making victory with the all-new Can-Am Maverick X3 side-by-side vehicle in its first official race. Derek drove his Maverick to victory in the Turbo Pro Production class and a third-place overall amongst all UTV classes.

The Can-Am / Murray Racing teams outlasted 60-some other entrants and 650 miles of brutal desert terrain to stand atop the podium in two separate classes at the Vegas To Reno race, which BITD calls “the longest off-road race in the United States.”

“The new Maverick X3 side-by-side vehicle is simply amazing and the closest thing to a race-ready vehicle from a major manufacturer,” said Jason Murray, after his BITD win. “We are so excited to have finished Vegas to Reno after 650 miles in the new Can-Am Off-Road Maverick X3 in its first race. To top that off, we scored two huge first-in-class victories.”