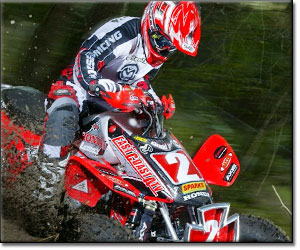 At the GNCC ATV John Penton, riders on Razr’s went straight to the podium.

Maxxis ruled the course, sweeping the top four and taking eight spots in the overall top ten. The race was held May 13 in Millfield, Ohio.

Borich maintained his points advantage with his fourth straight win, crossing the finish line in 2:16:08 hours. “I caught up to Chris (Jenks), got around him and battled for a bit, got to Bill and got around him, and that’s how I won,” Borich told gnccracing.com.

Borich and Sommers aren’t the only Maxxis riders on winning streaks: Traci Cecco took her sixth consecutive victory in the women’s category, finishing in 2:10:08 hours.

Maxxis congratulates Chris Borich and Traci Cecco on their victories and thanks all of these riders for their fine performances.

Dirt Trax Onlinehttps://www.atvmag.com
Check back frequently for new content and follow us on social media!
Previous articleHas There Been A 700 Shootout?
Next articleKYMCO MONGOOSE 250