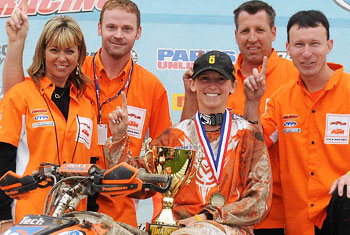 FRE/KTM rider Adam McGill earned 5th overall at the tenth round of the GNCC Series at the Unadilla Valley Sports Complex.

McGill started the race inside the top ten and had moved into the top five as the riders entered the woods section. By the second lap, McGill had taken over the lead.

McGill decided to pit on lap three while the other riders continued on. He reentered the track in 7th position. “I lost quite a few positions on my pit because the top five riders were so close together you could practically throw a blanket on top of all of us,” commented McGill.

McGill continued to ride a strong race and climbed back up to the 5th place position. “The pace was very fast. This was one of the fastest courses this year and it was really hard to gain time on the other riders – we were all just riding really fast and really well. Overall I am glad with my finish. I would have liked to land on the podium but I am glad that I had a clean race and finished less than a minute down from the leader.”

XC-2 Pro-Am Josh Kirkland put in an impressive ride to finish 2nd aboard his KTM. Kirkland worked his way from a 17th place start to move into 2nd position by the checkered flag. Kirkland now sits 18 points behind Brian Wolf in the championship chase.

FRE/KTM Women’s rider Angel Atwell moved one step closer to winning the Women’s Championship with a solid win at Unadilla. Atwell is currently holding the points lead over her niece Kristen Atwell.