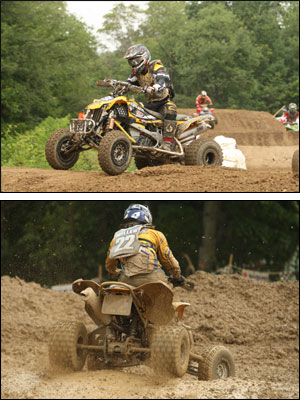 As the end of the 2008 season draws near, Warnert Racing’s John Natalie once again has proved why he is the “Ironman”.

Even after flipping his quad in moto number two of round nine of the AMA ATV Motocross Nationals, the #13 Can-Am laid down the fastest lap time of the weekend with a blistering 01:45.496 lap at Pleasure Valley Raceway.

In moto number one, John came off the line in 4th place and was applying pressure to take over 3rd, but a flat tire caused by a rock forced Natalie to slow his charge.

Despite his tire difficulties, John was holding fast to 4th place, but in lap eleven John encountered a mechanical issue that ended things a little early for him.

In the second moto, John came off the line looking strong, but soon ran into problems. “I hit a rut and flipped my bike. That put me back to last place, but I made up for it.

I got the fastest lap time of the race in the next lap and moved all the way up to 10th,” John stated.

Unfortunately, Mother Nature decided that she was going to rain on everyone’s parade and let loose with a torrential downpour that caused many racers, including Natalie, to toss their goggles aside when visibility became too poor.

“I couldn’t see anything because off all the mud, so I took off my goggles,” said Natalie, who dropped back to 12th due to the deteriorating conditions. John ended his day in 14th place overall but remains optimistic that things will be different at the next round at Red Bud. “We’ve been doing a lot of work to the bike and it is running great. We’re really getting things dialed in and I’m looking forward to Red Bud. I think we have a good shot at a 1-1 finish,” he concluded confidently.

Warnert teammate Cody Miller is currently tied for 11th place in the points race after round nine, which is quite an accomplishment after not being able to compete in the season opener.

Miller was at the back of the pack off the gate in moto one, but Miller’s determination allowed him to soon make quick work of Cale Downen and Sage Baker and work his way into the tenth spot, where he would finish in the first moto. “The bike ran great and the power was right there. I didn’t have any problems,” said Cody.

In moto number two, Miller came off the line in 14th place and was doing well until lap six. Miller lost traction in a turn and spun out, which sent him to the back of the pack. Cody didn’t let his mishap get the best of him as kept focused and began to move back up through traffic until the rain began to fall.

The intensity of the sudden downpour caught many racers by surprise, including Miller. “It was raining so hard and it got really muddy. I couldn’t see anything so I threw my goggles,” he said.

Despite the rain and mud, Cody still managed to overtake Yamaha’s Pat Brown before the finish line, which landed him in 17th and gave him a 13th place finish overall.

The Warnert team will be heading to Red Bud in Buchanan, MI for round ten on July 26th-27th, where John Natalie could possibly break into the top five in the points race if his prediction of a 1-1 finish comes to pass.

Dirt Trax Onlinehttps://www.atvmag.com
Check back frequently for new content and follow us on social media!
Previous articlePolaris Racer Angela Butler Podiums at AMA
Next articleSuzuki Hits the Bulls-eye with the Z400 EFI