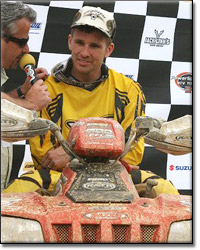 They’re 2-0: Riding Maxxis to victory, Daryl Rath and John Natalie dominated the inaugural weekend of the WPSA PowerSports ATV Championship Tour. The opening two rounds of this exciting new series were held May 20-21 in London, Kentucky.

Notable amateur performances included Angela Butler, who aced both rounds of the women’s class, and Nathan Commer, who won both the A and SuperQuad ProAm classes in Round 1.

Maxxis congratulates all of its riders on their fine performances.

The tour’s next stop is scheduled for June 3-4 at the Echeconnee MX Park in Lizella, Georgia. Highlights of the races will be telecast on ESPN2 beginning in June.

Check your local listings, and tune in to see why ATV racing is one of the most exciting sports around, and why Maxxis is the brand of champions.