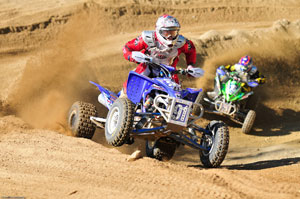 Jolly Roger Motorsports Park once again played host to this round of the series that some new faces amongst racers, one of those being Petra Lindeborg from Sweden.

Petra will be in the states for the entire summer racing for team Polaris via Southside Motors and will be joined by 3-4 of her male teammates over the next couple of weeks.

All though the #109 Polaris of Lindeborg only placed in 6th overall, it is certainly a fantastic opportunity for the Swedish racer to take part in events in the U.S.

Amy Thompson took the win in the Women’s class, which was her first win of the season. Paige Whipple, who has dominated the class for most of the year, took second, while Casandra Depizzol claimed the third spot overall.

In the Open Pro class, Jasmin Plante, who was absent from the AMA ATV Motocross Nationals this weekend, grabbed the Holeshot in Moto one followed by Michael Pilotte, and Vincent Mofford. Joe Haavisto had a mid pack start and soon worked his way up to second place.

Plante and Haavisto were engaged in a heated battle for first for almost the entire moto until a rock got stuck in Haavisto’s front brakes in the last lap, which sent him flying over the handlebars.

Haavisto’s crash allowed Plante to complete the last lap unchallenged and take the win. All though Haavisto was uninjured, he still took a DNF due to the damage done to his quad by the rock. “I got a bad start and then got that rock stuck,” stated a disappointed Haavisto. Vincent crossed the finish line a distant second while Danny Lewis claimed third.

In Moto number two, it was Plante who once again grabbed the Holeshot with Haavisto right on his grab bar. The pair battled back and forth passing each other several times during the course of the moto, which had the crowd cheering wildly. Unfortunately, Haavisto once again suffered mechanical issues and fell back to 8th place allowing Plante to take the win.

As the rest of the racers crossed the finish line it was Thomas Mofford who would take 2nd, and his 5-2 finish allowed him to claim 2nd overall, while Danny Lewis’s 3-4 finish earned him 3rd overall. Vincent Mofford claimed 4th overall and Justin Hoffler’s 7-3 finish allowed him to round out the top five.

In the Pro-Am class the competition was once again fierce between Joe Haavisto and Jasmin Plante. Plante grabbed once again grabbed the Holeshot in Moto one with Haavisto right on his grab bar. The pair battled, but Plante successfully held off Haavisto taking first with Haavisto in second. Michael Pilotte ran strong finishing in third.

In Pro-Am Moto two, it was Haavisto that grabbed the Holeshot over Plante and the two once again began to battle, but this time it was Haavisto who was the victor crossing the finish line in first, which would get him the overall Pro-Am win for the day while Plante had to settle for second. Justin Hoffler ran a good race with a 5-3 finish which earned him 3rd overall, while Thomas Mofford and Michael Pilotte claimed 4th and 5th overall.

The next round of the NEATV will once again be held at Jolly Roger Motorsports Park in New Hampshire on June 22nd where more of the Swedish Polaris team is expected to make their U.S. racing debuts.