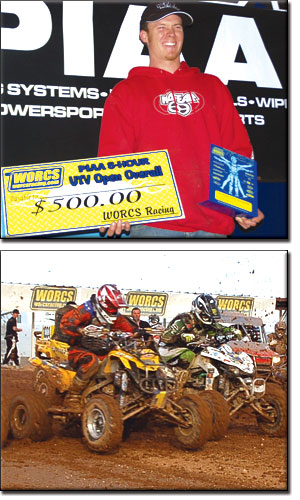 By any measure, the recent inaugural PIAA 8-Hour WORCS UTV/ATV Endurance Race, held at Speedworld Raceway in Surprise, Ariz., on Saturday, January 12, was a spectacular success, drawing 40 teams and more than 160 riders, ranging from factory teams to local ATV enthusiasts.

Josh Fredrick and Brandon Smith of Team Motoworks/Can Am took the midnight checkered flag for a wire-to-wire victory. Fredrick and Smith grabbed the lead in the first hour and never looked back, riding their DX450 to the Overall ATV Pro title.

The PIAA 8-Hour also featured the first-ever UTV endurance showdown, with Travis Peterson scoring the overall UTV victory. And in a performance that showed the mettle of a stock Yamaha Rhino, Derrick Elliott won the Stock UTV class and second overall driving a Side X Side Magazine-sponsored machine.

“PIAA couldn’t be happier with the turnout and success of this first-time event,” said a thrilled Gordon Robertson, PIAA Powersports manager. “Everyone here had a great time. It was a safe, challenging, and fun event, and we were thrilled to be the sponsor. Thanks to Sean and Pepper Reddish and everyone at WORCS for putting on such a great race. And thanks to all the racers who took up the challenge.”

Reddish, president of WORCS, was equally enthusiastic: “I was pleased to see the turn out for this inaugural event. PIAA put a lot of work into this, and the overall atmosphere of this event was great. Endurance racing is awesome.”

While there are a handful of ATV endurance races held in the U.S. (such as the 12 Hours of ATV America each fall), the PIAA 8-Hour was the first endurance race to include the popular UTV/side-by-side vehicles. The race course featured a 6-mile loop that started on the Speedworld motocross circuit before heading out into the desert.