Round 2 of NEATVMX – Walden MX 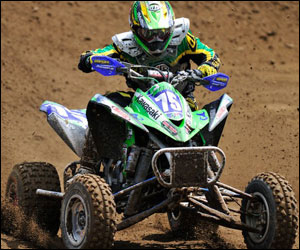 A perfect day of racing is how round 2 of the NEATV MX series could best be described. Rain that was forecast for the area subsided and the clouds soon gave way to sunny skies, making track conditions ideal.

There were many changes made to the Walden Motocross track just for this race and those changes seemed to suit Joe Haavisto to a T as he took his second consecutive 1-1 win in the Open Pro class.

The changes that were made to the Walden MX track for this event had many racers commenting that this was one of the best tracks they had ever raced on at Walden.

There were some sandy sections incorporated into the hard-packed clay. The finish line tabletop had been removed and replaced with a sandy area, and there were a couple of triples added to the mix. However, the first turn off the start remained the same and funneled down to a narrow, tight turn that was the cause of several pileups throughout the day.

As the gate dropped for the first moto, Joe Haavisto appeared to be first in line to claim the holeshot, but Michael Pilotte, Danny Lewis, and Myles Santaniello edged him out. Haavisto had to settle for 4th off the line, but he soon began working his way up.

I was in about 4th place, but I worked myself up to the lead by the 3rd lap, said Haavisto, who once in the lead, kept increasing the distance between himself and the rest of the pack.

Michael Pilotte ran a very impressive race for the entire moto, holding off the competition all the way to the finish line. Joe Haavisto went on to take the win in moto 1 with Michael Pilotte in 2nd and Danny Lewis in 3rd.

Moto number 2 was like déjà vu for Haavisto, as he once again took 4th in the holeshot. Michael Pilotte was once again in the lead, followed by Tommy Mofford and Myles Santaniello.

Michael Pilotte’s 2-2 finishes earned him a solid 2nd and Myles Santaniello’s 4-4 consistency was enough to land him in 3rd. Tommy Mofford took a 6-3 finish with 4th overall and Michael Brown’s 5-6 finish rounded out the top 5 for the Open Pro class.

All though Haavisto had a great run in the Pro class, his was not having as good of luck in the Pro-Am ranks. Haavisto came off the line in 5th in moto 1 with Danny Lewis in the lead, followed by Michael Brown and Justin Hoffler. Haavisto wasted no time in working his way to the front and was holding a good lead until the last lap.

I guess I was just pushing too hard or something, but I spun out in the last lap and that let Lewis, Brown and Hoffler get past me, said Joe. However, when Pro-Am moto 2 came around, Haavisto showed he was still the man to beat. Joe came off the line in 3rd. Joe soon took over the lead and kept his position all the way to the checkered flag.

Danny Lewis claimed 1st overall for the Pro-Am class, with Haavisto in 2nd, Justin Hoffler in 3rd. The two Yamaha’s of #36 Michael Brown and #12 Jonathan Hansen rounded out the top 5 overall for the day.

There was plenty of excitement in the kid’s classes as well. Wade Pollard from Granby, CT dominated the 0-70cc Limited class with a 1-1 win, followed by #17 Andy Cummings in 2nd and Michael Pahlas in 3rd.

Andy Cummings may have placed 2nd in the 0-70 cc class, but he smoked his competition in the 0-90cc Limited class taking a 1-1 win, followed by Timothy Donovan from Tiverton RI in 2nd and Wolcott, CT’s Jenifer warren in 3rd.

The next round of the NEATV-MX series will head to Lempster, New Hampshire where the more sandy soils of Jolly Roger Motorsports Park will play host on May 25th. As usual, there will be a Saturday practice unless otherwise posted.

For a complete schedule of NEATV-MX events and how to join the NEATV, you can check out www.neatv-mx.com for more information.