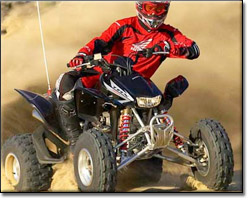 Honda’s TRX 450R adds electric start for 2006, which is a hot ticket feature the masses have been craving.

Honda didn’t stop there, though. The 450’s engine has been seriously juiced to bring it nearer Yamaha’s YF-Z 450 in the power and torque departments.

The TRX has established a significant history of racing laurels since its introduction and with this year’s upgrades will continue to be a force in its class.

Tell us who you thought should’ve won Best Pure Sport ATV in All-Terrain Vehicle Magazine’s 2006 Best In Class Awards. Scroll down to cast your vote!!

Dirt Trax Onlinehttps://www.atvmag.com
Check back frequently for new content and follow us on social media!
Previous articleZ400 A Strong Contender
Next articleOutlaw Too Good To Ignore