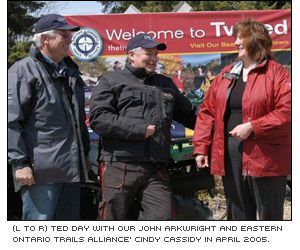 It is with great sadness we report the snuffing out of a life which had a profound impact on the sport of snowmobiling and ATVing in Ontario.

In the early afternoon hours of August 14th Ted Day, Ontario Tourism’s point man for promotion of the Province’s highly regarded trail-tourism products, was suddenly and tragically killed in a head-on car crash near Ignace, Ontario. Ted was on vacation.

Ted’s mark on the sport of snowmobiling has been indelible – spanning years of intensely dedicated work to ensure Ontario’s snowmobiling opportunities, fantastic trails, Clubs and Associations were given their due – going the extra mile to support the infrastructure of snowmobiling while telling snowmobilers across North America about his beloved Ontario.

From all of us here at Supertrax and All-Terrain Vehicle Magazine we extend our deepest and sincerest heartfelt condolences to Ted’s family. Our prayers are with you.

On this day we have lost a friend.

Private family Memorial to be held on Saturday, August 19th. Public Memorial Service to be announced.