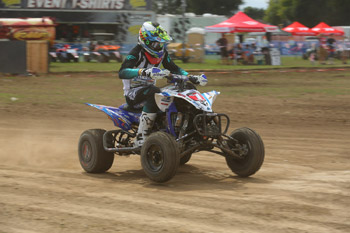 Yamaha Racings Chad Wienen defends his title in the AMA Pro ATV MX Series with his fifth consecutive championship, placing him second among all-time ATV motocross champions. Wienens victory further solidifies his position as the most successful ATV racer of the 21st century.

Wienen bested the competition on Yamahas race-proven Assembled-in-USA YFZ450R sport ATV, with unmatched consistency and dominating performances. He landed on the podium in every race and was the only Pro ATV MX racer this season to finish each round in no lower than second place. Wienen finished off the season with 532 points.

“Its a thrill to be part of this team and historic run with Yamaha and Wienen Motorsports – it was undoubtedly a very exciting season for us,” Wienen said. “The consistency of the YFZ450R is unlike any other machine and its unmatched reliability played a vital role in keeping my lead throughout the series.”

Wienen earned his first Pro ATV MX championship in 2012 and has been securing his place in the record books ever since. In the last five years, he has won 30 of 52 rounds, while placing on the podium in all 52 rounds. Of 104 races, Wienen has never placed lower than fourth, with 102 top three finishes and 49 first place finishes.

“Chads success with the YFZ450R is history-in-the-making for ATV MX and Yamaha Racing,” said Steve Nessl, Yamaha ATV and SxS group marketing manager. “All of us at Yamaha are honored to be a part of Chads success as he continues to prove himself as one of the all-time greats.”

Yamaha Motor Corporation, USA, (YMUS) a leader in the motorsports market, makes the toughest, most capable and versatile ATV and Side-by-Side vehicles. The companys ever-expanding product offerings also include motorcycles, outboard motors, personal watercraft, snowmobiles, boats, outdoor power equipment, accessories, apparel and much more. YMUS products are sold through a nationwide network of dealers in the United States. Headquartered in Cypress, Calif., since its incorporation in 1976, Yamaha also has facilities in Wisconsin and Georgia, as well as factory operations in Tennessee and Georgia.