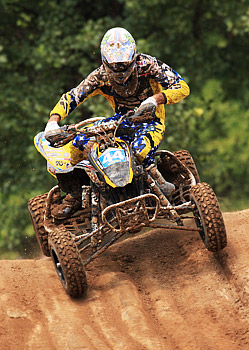 This was Wienen’s second win in two rounds and the third win for the team over the course of the final four races of the season. Wienen finished third in the overall championship points battle.

“We at BRP are excited to see the Motoworks team finish the season on such a strong note and want to thank everyone on the team for a hard-fought season,” says Jimmie O’Dell, Racing Manager for Can-Am ATVs at BRP. “While we would have loved to bring home a championship, we cannot be disappointed in a season that saw BRP get its first ATV national motocross win. Going into the off-season, we will take everything we learned this season and work hard for the championship next season.”

Team Motoworks Can-Am Pro ATV racers Wienen, John Natalie and Jeremie Warnia all finished the season in the top 10 in points, with Wienen and Natalie each taking overall wins. Warnia’s highest finish was a fifth.

“We truly cannot thank Can Am enough and I believe we left an impression on everybody for next year,” said Motoworks team owner Johnny Leach. “Even though our team didn’t win the championship, we will be the team to beat next year. Our bikes are definitely the fastest bikes in the field right now; cant wait until next year.”

In the amateur ranks, Cole Henry from Petersburg, Virginia took the Production A overall championship on his Can-Am DS 450 and finished in the top six of the Pro-Am Unlimited class.

In the Production A class, Henry had seven podiums with four overall wins on the season. His brother, Chase Henry, took the 4-Stroke B championship on his DS 450 and was second in the 450 B class. In the 4-Stroke B class, he was on the podium nine of the 11 rounds and had seven overall wins.

“I have to thank Can-Am, Motoworks, DWT and my mechanic and all my sponsors for everything they have done for me this season. Im hoping to continue to be on the podium at the start of next season.” – Chad Wienen

“I was feeling good and I was hoping for a win, but Im really happy for Chad and our team. This was a good season for us and I think we made a lot of progress so I am definitely looking forward to next year.” – John Natalie

“I have to thank everyone for all of their help this season and I am happy to have been riding for Can-Am this year.” – Jeremie Warnia

Bombardier Recreational Products Inc. (BRP), a privately-held company, is a world leader in the design, development, manufacturing, distribution and marketing of motorised recreational vehicles. Its portfolio of brands and products includes: Ski-Doo and Lynx snowmobiles, Sea-Doo watercraft and sport boats, Evinrude and Johnson outboard engines, direct injection technologies such as E-TEC, Can-Am all-terrain vehicles, side-by-side vehicles and roadsters, as well as Rotax engines and karts. With manufacturing facilities on three continents, BRP products are distributed in more than 80 countries.