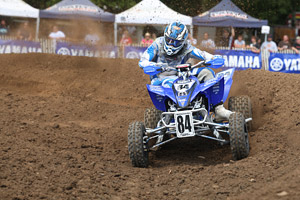 Brown finished in first place in both motos aboard his YFZ450 securing his championship for the 2008 series.

Yamaha congratulates Thomas on his national pro-am motocross championship, said Steve Nessl, marketing manager for Yamaha’s ATV/SxS group. Thomas is no longer an up-and-comer  he’s a true champion at the top of his game, and we’re proud to have him riding with Yamaha.

Brown has been racing since 2004 when he won a national 90cc class mod title, and he joined the Yamaha Factory Racing team this year.

Dirt Trax Onlinehttps://atvmag.com
Check back frequently for new content and follow us on social media!
Previous articleToe In or Toe Out?
Next articleWhich ATV Rides Smoothest?