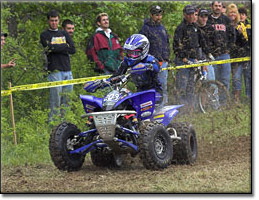 With rain falling before and during the event, the dark Ozark Mountains soil turned slick and gooey, adding to the difficulty of negotiating four 11-mile laps of woods, hollows and streams – and plenty of rocky uphills and downhills.

At the dead-engine start Cecco got her machine fired up first and took the lead until she – along with the rest of the class – was thwarted by a slippery hillclimb about three miles into the first lap. By the time the riders found a way around the obstacle Cecco was back in 10th with her sights set on catching the leaders. “It was a tough track, toughest of the year so far,” she reported after the race. “The rain started to pour halfway through, and it was very hard to read the track.”

After working her way up through the field, Cecco and Atwell battled near the front until the mid-race pit stop. Not long afterwards, though, a traffic bottleneck held up Cecco while Atwell forged ahead, ultimately to take the lead and the win.

With the season nearing the halfway point, Cecco and Atwell hold a strong points lead over the rest of the competition on their Yamahas.