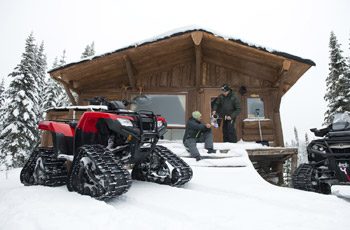 With the cold weather encroaching it won’t be long before the northern states and provinces are covered in a deep blanket of snow.

While this might signal end of riding for some, it’s just the beginning of having fun for those equipped with a track kit. The Commander WS4 kit from Kimpex goes several steps further and allows you to get the most out of all four seasons. With its unique configuration that eliminates sliders, the WS4 shows amazing efficiency on all types of terrain and an all conditions along with ensuring reduced friction and rolling resistance.

The tracks used on the WS4 were specifically designed to maximize traction without sacrificing ride quality. The center pallet track design with 1-inch lug height on the front tracks and 1.25-inch lug height in the rear provide optimal traction for plowing through snow while also self cleaning itself of debris. Clearing obstacles is made easier with 1-inch higher ground clearance compared to the competition along with a high front wheel mount that aides in rolling over tall barriers in your way.

One of the biggest challenges with any track kit is ride quality and reduced steering effort. Kimpex engineers spent a considerable amount of time perfecting the agility of the WS4 by reducing the ground contact patch and by spreading the load on three wheels. This not only improved agility and increased stability but also reduced the load placed on power steering systems.

With all the work that went into reducing vibration and friction comes a smoother ride. Double wheel bearings with sealed caps, rubber coated wheels and its revised geometry translates into a surprisingly smooth riding track kit that has proven to get you places others would never attempt

For more information on the WS4 ATV track kit or to learn more about the WSS4 UTV kit visit kimpex.com