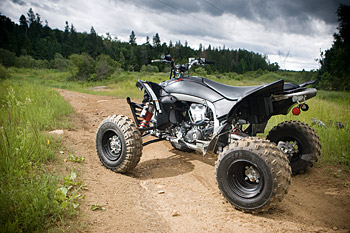 From the many questions and quotes we see online its clear some people may not understand the difference is between a 2-stroke and a 4-stroke engine.

Its not a matter of life or death to know or not, but it does help to be able to distinguish between the two engine types and know a little more about whats idling under your seat. So here is the simple explanation of the differences.

The 4-stroke engine essentially follows this same process except it is taking two rotations of the crank to complete all four cycles instead of just one. The four cycles include: Intake of the fuel and air mixture on the down stroke, which opens the intake valve to let the air and fuel mixture into the combustion chamber, compression of the air and fuel mixture as the piston moves up inside the cylinder, then combustion of the mixture which forces the piston down inside the cylinder and then finally the exhaust valves are opening and the fumes are forced out of the combustion chamber on the up-stroke.

Many ATV enthusiasts remember the distinct sound of the late eighties Honda 250r ATV as it was quite possibly the hottest race ride from the nineties and on into the mid 2000 cross-country and ATV motocross scene.

The ding, ding, ding of the motor and the smell of mixed race gas coupled with awesomely explosive power was something that attracted many to the sport. Eventually though the ringing of the two banger would be replaced by the BRAAAP of the four stroke motor.

There are benefits to each of these mills and it is a hot topic in the powersports industry. At least now instead of replaying last nights episode of Duck Dynasty in your head youll be able to stay involved in the conversation next time your resident gear head starts spouting off.