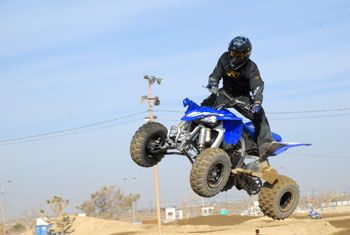 At first glance you might not think there’s a whole lot different about the 09′ YFZ however that’s far from true.

In an upcoming issue of All-Terrain Vehicle Magazine we’ll go into greater technical detail. For now we want to let you know how the 2009 YFZ felt on real world track and trail.

There’s no doubt the new 450 motor is enjoying an EFI upgrade. Power is abundant and when put to the trails this beast wants to roar. Whether hard-packed dirt or soft California sand the motor puts muscle to the ground.

At first we thought the 09′ actually felt soft down low. However, the ECU maps the RPM range and accounts for what it believes is wheel spin almost like traction control. At times you may feel this slight override but it actually improves launch and helps the 450 stay hooked up.

In stock form the YFZ motor is happy on the track and surprisingly stout on the trails with a more usable power band than earlier renderings of the YFZ.

The suspension on the 09′ is also head and shoulders above it’s predecessors incorporating more finely tuned technology that we’ll get into at a later date, bottom line is the new design really works well.

Engineers took both track and tail into consideration during development, creating a stock 450 class ATV that traverses both with ease.

Considering that an overwhelming majority of 450 buyers don’t actually race, this is a smart move for Yamaha.

Ergos, control surfaces and the overall feel of the 450 are more refined and trail-able. The seating position is great for moving around on the track but out on the trails the YFZ tops its competitors in comfort.

At the intro of the 09′ YFZ we were privileged to ride a tricked out GYT-R model featuring every imaginable upgrade available from your Yamaha dealer. Billet head and valve gear; high comp piston, pipe, EFI programmer and a variety of other tricked-out parts.

While we weren’t sure what to expect, we can say that we now have far more faith in GYT-R hop-up parts.

The GYT-R package on the test unit we rode was worth almost half what the YFZ itself costs, but we wouldn’t hesitate to say the it was every bit as competent as a fully prepped factory race ATV.

The following weekend, Yamaha factory racer Dustin Nelson blew away the competition at Glen Helen as he debuted his 2009 YFZ proving it has what it takes to own the podium. We feel it will attract its share of trail enthusiasts too.

Dirt Trax Onlinehttps://www.atvmag.com
Check back frequently for new content and follow us on social media!
Previous articleCreagan and Prowler Begin 2009 On Podium
Next articleBad Boy Partners with G-Force On Project