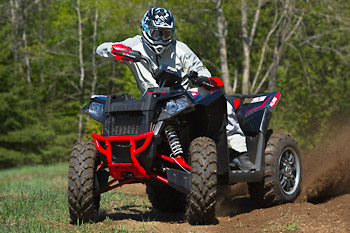 We shared our preliminary impressions of the Scrambler with you back in August 2012 and after a bit more saddle time on our own turf we continue to be impressed.

Youll want to hold on tight as you grab a handful of throttle. The power from the 77 horsepower 850-twin creates a sensation you might confuse with the first drop in on your favorite roller coaster. As your heart rate quickens and your eyes widen your insatiable lust for speed only amplifies.

To delivery better control over all this raw power, the electronic power steering does a fantastic job of soaking up rock hits and reducing fatigue as you maneuver through tight twisties and over rock strewn patches of trail. We continue to gush about the wonders of power steering on an ATV and only those who havent tried it will remain non-believers. This feature alone is enough to justify shelling out more dough for the LE version.

Our most recent riding has been in relatively dry conditions, however one complaint we had during our first ride last summer on wet and muddy trails was the noticeably poor clear out in the foot wells where mud seemed to gather.

Furthermore, the trimmed up plastics look red-hot and will turn heads in the showroom and as you blast past onlookers on your favorite trail network, however the rear fenders do little to prevent a twenty feet high roost of muck from showering back down on the ATV and rider. We firmly feel the rear fenders could be a touch wider without limiting the appeal of the Scram.

After being out on the Scrambler all morning, Dirt Trax Television Co-Host Luke Lester turned to this writer and said, “Here’s a quote for Twitter. The Scrambler is my new favorite ATV.” Can’t get a more honest opinion than that.