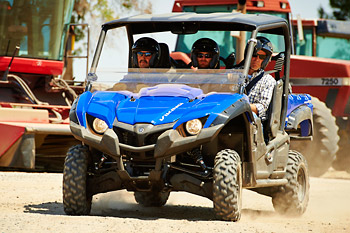 Yamaha just announced it has come to bat with an all-new from tip-to-tailgate side-by-side called the Viking.

The Viking is a completely new vehicle in every way and from what we’ve seen is willing and able to compete with anything in its class.

Even the engine and drive system have undergone serious re-engineering in sync with the all-new Viking platform.

Yamaha engineers threw out the Rhino blueprints, scrapped the molds and have re-thought the whole SxS equation. Make no mistake about it, this is more than a simple re-style.

Years of thought and planning was put into this vehicle. The ergos and comfort level inside the Viking’s cabin have set a new standard that will have its competition scrambling. This true 3-seater is the most comfortable SxS we’ve ever put our respective butts in.

For Yamaha, this is the biggest news to come out of its camp in quite some time and we believe it was well worth the wait!

DirtTrax will be amongst the first media outlets to get our paws on one though and you can bet we’ll put it through its paces.

Make sure you get a copy of the upcoming issue of DirtTrax magazine to read more about the 2014 Viking and stay tuned to DirtTrax Television for an evaluation.