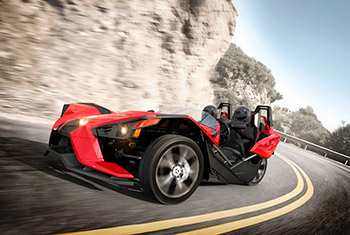 Lets get a couple things out of the way real quick. The innovative Polaris Slingshot is not an offroad vehicle and yes, we are an off-road media outlet. So why are we covering the Slingshot?

First, it is incredibly cool. Second, Polaris is a huge player in the offroad market. Third, the Slingshot is a legitimate side by side and fourth, we’re nuts.

Wait, there’s more. The Slingshot isn’t a car, it’s a motorcycle. We really don’t care what anyone thinks the Slingshot is or should be. We know this for sure – it is the coolest, wildest, craziest three wheeled motorcycle we’ve ever ridden.

Is it fast? Yes, it is very quick. In fact it lays rubber all the way through first and second, squawks in third and lays a patch into fourth. Nice.

The Slingshot weighs 1700 pounds using a monocoque space tube frame and an all plastic body. The chassis is sophisticated using many race-car cues including forged suspension A-arms.

There’s no roof and won’t be one in the future. There are no doors and Polaris doesn’t plan to offer any. This is an open air vehicle similar to a motorcycle in many ways.

The entire cockpit including gauges, switchgear and seats are all marine-spec waterproof and there are two lockable storage bins behind each seat.

From a handling perspective we never felt like the Slingshot had one rear wheel. The inherent stability in the low CG chassis produces a super-car-ish 1.1 G’s on the skid pad.

We don’t doubt the claim after experiencing a skid pad demo in the hands of a talented Polaris test rider with traction and stability control shut off.

You’re probably wonder like we did before our first ride: What exactly is the Slingshot? Our answer: It’s the coolest, most attention grabbing, fun to drive, high performance on road SXS vehicle you’ll see in MY 2015.