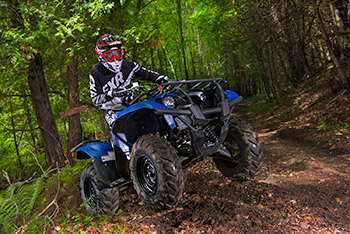 The 2016 base model Kodiak 700 gets overshadowed by the Grizzly, but there’s really not that much difference in the size department.

Here’s where things get really interesting though. Both the Grizzly and the Kodiak are using the same engine! Yamaha revamped its stout big bore single when it introduced the Wolverine side-x-side this past January and as predicted its all-new 708cc, 4-valve, fuel-injected engine has sprouted up in Yamahas ATV line in not only the expected Grizzly but also under the seat of the Kodiak as well.

The difference here is clutching. The Grizzly uses 18 gram weights in its primary to produce a harder hitting feel when the throttle is stabbed. The Kodiak on the other hand uses slightly heavier 30 gram weights, which smooth out RPM and create a more relaxed and casual riding experience.

Blasting down trails, the powerful engine responds to throttle input like a champ and there’s enough power to get the front wheels up whenever you’re so inclined. What’s the top speed? No idea. This package included no speedo (pretty much zero gauges of any kind – including a gas gauge), but it feels fast so were saying a million MPH. A million seems right.

To compliment this impressive engine package is even more impressive ride quality. Suspension from the fairly basic shock setup and dual front and rear A-arm independent system is plush and smooth and even though we are just a bunch of babies spoiled by EPS, its absence goes nearly unnoticed on the base model Kodiak as handling feels predictable and controlled with very little harsh feedback though the handlebars.

Besides, if you want EPS it is available on the next model up. Stopping power from the front disc and sealed rear wet brake is simply on-point and as always wed like to point out were fans of the dual brake lever.

Not to belabor the fact that the base Kodiak is light on extras, but at some point you’ll notice it doesn’t have diff lock. You’ll have to shell out a few more coins for that and the manual 4-wheel drive lever instead of a push button system seems wacky and cumbersome, but the important thing is that it works and it works well.

Realistically, you’ll probably be riding in two all day anyways and if the situation calls for it, simply flip the lever to engage 4WD and flip it back when you don’t need it. Tough to complain about something that works so well.

The Kodiak is being marketed as a farm use, utility ATV and we are darn sure it can do all that and more. However, if you’re thinking about moving into a big bore ATV and don’t want to break the bank, you can pick up a 700 Kodiak in the ball park of what other manufacturers are offering their 450’s and 570’s for and you won’t sacrifice anything in the way of performance. We think that’s a formula that’s going to sell some units.