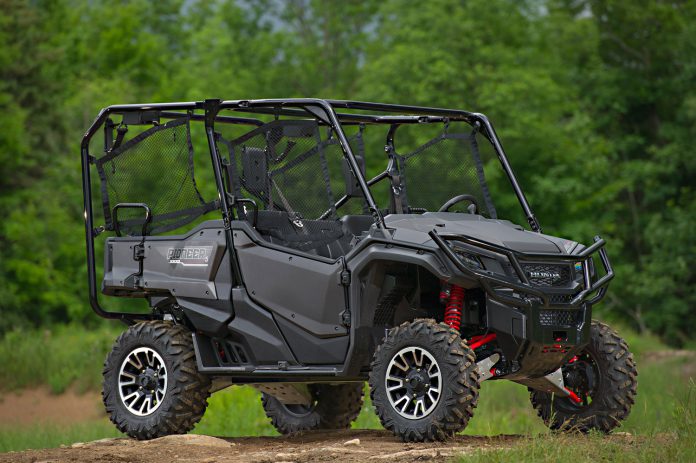 It’s been a while since we’ve had a Honda on-site at our Top Secret World Headquarters, but we lucked out this week and got a shiny new 2017 Honda Pioneer 1000-5 Limited Edition to evaluate.

As you can imagine, everyone’s been curious to get their first spin aboard this side-x-side and do a mental comparo against everything they already know about every other utility sport UTV they’ve logged significant mileage on.

First off, Honda’s nailed it with the design of this UTV…well, some of it anyways. The roll cage is ridiculously huge and the nets would be the first things to go, but quite honestly the Pioneer has the prettiest front end of any UTV in this class and the shimmering plastic bodywork is some of the nicest weve seen. Red accents are just enough – particularly on the springs of the new Fox QS3 3-position adjustable shocks (wicked).

Ride quality and handling are both excellent and the 999cc engine is powerful, like Honda needs to put this in a Rincon and a pure sport side-x-side yesterday kinda powerful!

Plus it really is loaded up with useable features like Honda’s I-4WD system, which monitors each wheel’s speed and applies brake force when it senses spin. Sorta…SORTA like an All-Wheel Drive system (Honda may deny that). However, it’s always on if you’re in 4 wheel drive mode and automatically does its job.

We have a lot to say about this unit and watch for Mark’s TEST RIDE of the 2017 Honda Pioneer 1000-5 Limited Edition on an upcoming episode of Dirt Trax Television.

Canadian pricing was a bit challenging to lock down, but heres a quick comparison of US pricing just because we have the Internet: