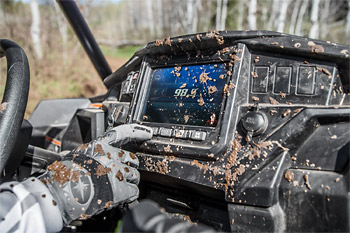 Available from the factory on select RZR models and as a dealer installed accessory on all RZR’s the new Ride Command system offers full integration and control of your Go Pro, Blue Tooth connectivity with your riding Buds and GPS connectivity.

Think about this scenario. When it’s super dusty you simply let your riding friends leave ten minutes before you and follow them on the big 7-inch dash mounted Ride Command screen.

If you’re faking sick and out riding there’s complete Bluetooth connectivity to your smartphone so you receive and send messages like you’re at your desk – but you aren’t – you’re riding on company time!

Ride command is different – it’s designed for off roaders – it’s not some off-the-shelf automotive gadget screwed into the dash of a RZR.

What does Ride Command mean to the sport? It means riders can literally be connected – sharing, capturing and making experiences all day.

Go Pro control is exponentially improved with Ride Command making the mandatory drill of taping every ride a simple task.

The concept of letting your riding pals get ahead or behind you or just being able to know your crew is safe back at base camp while watching their progress on your Ride Command screen is priceless.

This general concept was pioneered by Polaris snowmobile division using the handle “Rider X” to interface with a Bluetooth/GPS in dash screen. Polaris has monetized the system with available updates and databases (maps) for use with Rider X. Look for this to be part of Ride Command in the future.