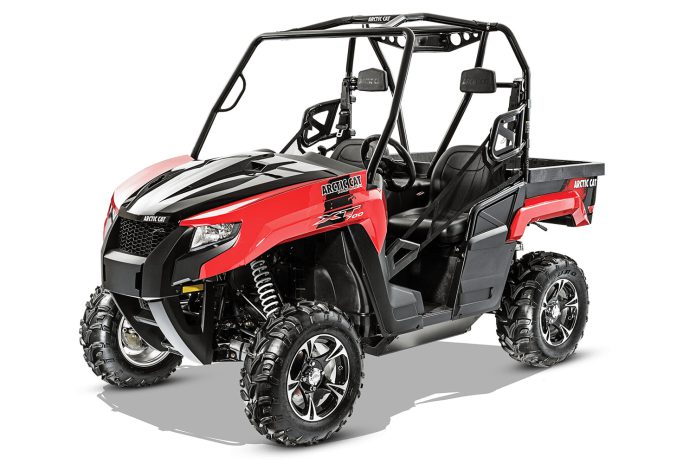 The recent changes to the Prowler dont necessarily mark a significant zag in the companys strategy for getting the attention of utility off-road customers.

Perhaps its biggest flaw is the fact it doesnt generate rushes of adrenaline or flabbergast customers with a long menu of new and unique mechanical and electronic innovations. It is what it is: A utility-targeted vehicle with enough handling, lightness and agility to be called a semi-sport UTV.

However, Cats management team were well aware the 700 XT, when compared to other competitors like the Polaris Ranger, Yamaha Viking or John Deeres Gator XUV 825i, although faring well in direct comparisons, was losing some of its showroom sizzle.

Cats solution was to revamp the Prowlers appearance, moving away from the Jeep look-a-like front grill and angular fenders it had relied on for years to a more organic-style appearance with flame-based styling cues for the hood, grille, side panels and new halogen+LED headlights resulting in a softer, certainly more modern look that will turn some heads out on the trail.

Prowlers are available with three different engines: A DOHC 695cc single (the one were focusing on here), a 500cc single and a top-of-the-line 1000 V-twin Cat has been offering for several years.

The EFI 700 has had an incredible reputation for reliability and produces enough torque to uproot an Egyptian pyramid. Although not a particularly smooth engine, its tractor-like bottom end is all but legendary in the off-road biz and this engine can chug down low in its powerband when youre climbing near-verticals or negotiating sticky mud in your fave quagmire.

Arctic Cat has long felt ground clearance is one of the key attributes any off-road vehicle needs to be able to excel in gnarly terrain and the Prowler has plenty… ten inches of it and ten inches of front and rear suspension travel.

Over the years, when daring ourselves in some of our most regularly-used mud holes, weve discovered we can keep a Prowler in 2WD longer without switching to 4×4 simply because it wont hang itself up as easily as some other vehicles.

Torque and ground clearance are major factors here and once you eventually engage fully locked 4WD, those standard-issue Duro Kadens bite hard and propel you to dry ground with nary a gasp.

Our press unit rode fairly harsh and we think it has everything to do with spring and shock calibration and not the design or geometry of the front and rear ends. Maybe the suspension engineering team felt the Prowler needed to be set up so it wouldnt bottom when loaded to the max. Dunno.

When youre unloaded or partially loaded, both the front and rear are pretty stiff and it makes the chassis buck fore to aft when youre riding over roller-type bumps instead of just sucking the suspension down and eating them.

Wed love to see some shock adjustability on the XT, especially so you could dumb down the compression damping those times youre not hauling your wifes cement elephant collection out back.

By the way, the fully composite tilting bed has 600-lbs of capacity and the tailgate works perfectly every time. It s easy to flush out and even looks nice.

Theres also a really nice 3-cubic foot storage area up front where the hinged hood is located and, believe us, it comes in very handy when youre out on the trail for long periods and need a dry place to keep your sandwich.

Cab legroom is adequate and all switchgear, although not stunning, works well and gets the job done. We especially like Cats hip protection and shoulder support and since there are no doors on the XT, it gives the driver and passenger a much more secure and confident feeling when riding off-camber or broad-sliding at higher speeds.

Power steering is standard on the XT and this system works very predictably and consistently with excellent feel and sensitivity.

This version of the Prowler is a workmanlike vehicle that will deliver years of reliable service. If, first and foremost, thats what youre looking for, youll be extremely happy with it.