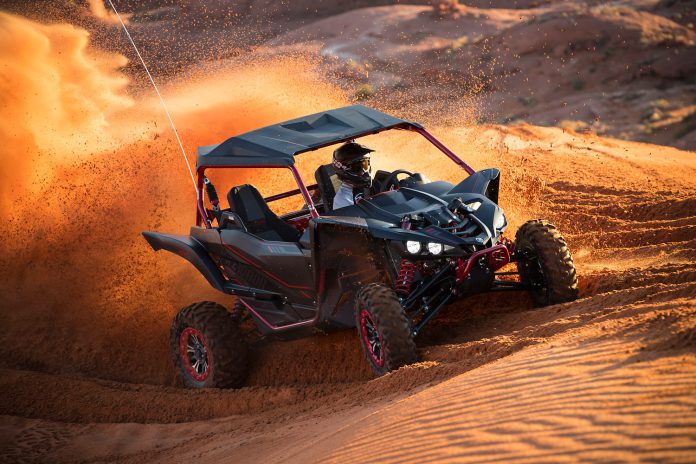 We asked Dirt Trax Televisions Luke Lester some interview-style questions about Yamahas latest version of the YXZ that only he could answer in his inimitable way. Luke doesnt pull any punches and tells it pretty much the way it is so read on and learn what he thinks of Yamahas 2017 YXZ 1000R SS with paddle shifters and an automatic clutch.

Dirt Trax: What were your first thoughts when you rode the original YXZ 1000? Did it surprise you?

Luke: The original YXZ surprised me in a big way for a number of reasons. First was the motor: That 3-cylinder engine is just a beast and it really set me back on my heels.

Second was obviously the transmission. I had no idea what to expect before I drove it… but I hoped it was going to feel like driving a high performance rally car – and it does.

Finally, there was the chassis. Its a very under-appreciated aspect of the YXZ, but it handles and rides fantastic.

Dirt Trax: Now that weve had about a year to evaluate the YXZ with manual shifting, what are your biggest pluses and minuses about that version?

Luke: The manual shift YXZ is really a conundrum for me. I love the manual transmission. I love that it requires the driver to pay so much more attention and forces so much more involvement in all aspects of the driving experience.

There really is nothing quite like holding a YXZ wide open to the rev limiter and powershifting through all five gears. However, driving in slow or tight situations is, lets just say, not ideal or appealing to me.

Dirt Trax: How does the new SS compare from the drivers seat? Is it for everyone?

Luke: This is an interesting question because I dont think there is such a thing as a SxS for everyone. Every SxS has its perfect owner. The original YXZs perfect owner was definitely someone who spent most, if not all their time in wide, open spaces like dunes or desert terrain. But the Sport Shift system really opens up the YXZ to a different type of user.

I can say in all honesty, the paddle shift system on the SS makes it easy and pleasant to drive anywhere, whether its the dunes, fast trails, tight trails or even mud and rocks.

You still have to want to shift manually, because youre still required to manually select the gear, but not having to massage that clutch pedal all the time makes the SS a way more pleasant vehicle for a much wider range of situations.

Dirt Trax: When youre driving it, are there any specific times the original version is better than the SS or vice versa?

Luke: If youre out in the open, where things are fast, the original may not be “better” in terms of actual performance, but it is still more fun. You cant get around the fact that having a fully manual clutch gives you a whole different level of control over how the power gets to the ground.

Other than that, though, Yamaha was very careful to incorporate features and technology that would ensure there are no actual performance advantages or disadvantages between the standard and SS YXZ models. Launch control is a great example.

With this system you can “drop the clutch” from a dead stop, just like with the manual version.

Dirt Trax: If you could have a wish list, what would you like to change about the 1000 SS?

Luke: Theres not much Id change about the SS. Obviously, with the latest announcements from some of the other OEMs in the pure sport segment, a bit more horsepower would be a welcome addition.

The only other thing I can think of is a bit of a personal preference but I think its an interesting thought. I actually would have preferred to shift the SS with the drive selector lever instead of the paddles.

The drive selector on the SS is in the same position and feels the same as the shift lever on the standard version. On the SS its only responsible for selecting forward, neutral and reverse. All the actual gear selecting is done with the paddle shifters.

It felt more natural to me to reach for the drive selector when I wanted to change gears. I got used to the paddles and they certainly do work great, but I still found myself reaching for that selector lever from time to time.

Dirt Trax: Given were seeing some changes in the industry with the recent intro of a more powerful RZR Turbo and the introduction of Can-Ams new Maverick X3, how do you think the SS matches up?

Luke: This goes back to the one thing Id change about the SS… or YXZ in general, if I could. Before Can-Am and Polaris raised the horsepower bar with the new RZR HO and X3, the YXZ actually held its own against the 131 and 144-hp turbos thanks to its ultra-efficient, gear on gear transmission.

Since it has no slippage, it transfers a way higher percentage of the engines power directly to the back wheels than a CVT system can. But theres just no way 110-hp, even through a manual transmission, is going to have a hope of keeping up to 154 and 168 horsepower vehicles no matter what kind of transmission they have.

Dirt Trax: Do you see the competition responding to the 1000 SS with anything similar?

Luke: I think it would be very interesting to see another manufacturer come with a manual or Sport Shift-style transmission in a SxS. However, at this point, I dont see it being a realistic expectation.

Time will tell, but right now I think its pretty clear: Yamaha has this corner of the market well covered and theyve done it in typical Yamaha style: Innovative, functional and durable.