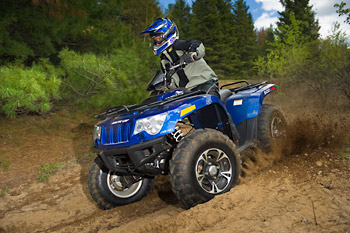 The full-sized Arctic Cat ATV chassis has been around a few years and when it comes to testing, is a pretty well known commodity. Its hallmark is market leading, incredible ground clearance, lots of suspension travel and an ability to use its 4WD system to the max.

With lots of ground clearance and really good tires, you can ride the 500 XT in some incredibly muddy, gnarly conditions in 2-wheel drive. Honest.

However, when you do need 4×4, you get a system that can be toggled on-the-fly using an electric handlebar switch and a handy diff-locker that is equally easy to engage. This system is positive, rapid acting and delivers unbelievable traction in some of the worst conditions imaginable.

Backing it all up is an overachieving engine with displacement that’s dwarfed in this class, but ends up producing close-to-the-top results – both at top end and bottom. With just 443ccs, Cat’s CVT clutching genius and this engine’s wide-as-the-Atlantic power curve, puts it right up there with bigger displacement powerplants, certainly those topping out at 500ccs.

Now that Arctic Cat has added EFI to this SOHC 4-stroke single, we find it even more difficult to separate its performance from its next biggest sibling, the 550 XT.

This is good news for buyers because the price is still remarkably good. It’s definitely a case of getting a bigger bang for your buck.

If there’s an Achilles heel it probably lies in Arctic Cat’s resistance to using a sway bar on its ATVs. To be fair, there are some interesting benefits to not having one.

For instance, when you’re riding trails on the 500 XT and you hit those off-center rocks and stumps with one wheel that can cause the bike to lurch side-to-side or bounce around at the rear, the impact is less than with some swaybar equipped vehicles…to a point.

Since all four of the Cat’s wheels are compressing the suspension independent of one another, the rider tends to not feel the jolts quite as much. The downside is body roll when you’re riding knotted trails at higher speeds.

Without a swaybar, a long travel ATV will tend to “roll” more in corners instead of maintaining a flat, horizontal plain. The engineers compensate for this by stiffening the suspension springs and jacking the shocks’ compression dampening.

Unfortunately, it tends to make the suspension feel less plush, especially in the first three or four inches of compression. It’s a bit of a compromise situation but Cat owners are used to it and apparently, it’s been one of the brand’s selling points.

If Arctic Cat is aiming to capture middle-market buyers with a full-featured ATV, then mission accomplished with these 500-series Cats. They offer a very complete list of 4WD features, a proven platform and solid power all at a bargain basement price tag.

Dirt Trax Onlinehttps://www.atvmag.com
Check back frequently for new content and follow us on social media!
Previous articleTEST RIDE: 2013 Can-Am Outlander 500
Next articleIS MODIFYING MY RUBICON WORTH THE MONEY?