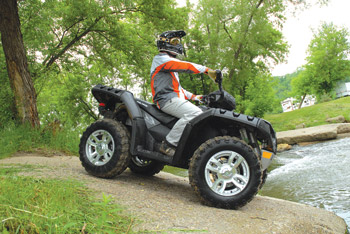 Yep, that’s three in a row for Polaris and we’re prepared to back up our choice for the third year running.

The new XP is neither a warmed-over Sportsman nor is it an update to an older model; this is a completely new ATV from the wheels up. After extensive riding we’ve concluded the XP platform is the new standard in the Sport-Ute segment.

Its innovations and design are flat-out too significant to ignore. A longitudinally mounted, all-new engine and a cross-mounted CVT provide a stance that’s as narrow as a dirt bike.

Its “long-arm” A-arm suspension takes handling up a full notch from the already stellar handing model it replaces.

This new 850’s power simply cannot be ignored; a claimed 70hp is the new standard for Big Bore Class power.

Despite the fact we’ve long felt the former Sportsman had the best ride in the biz, the XP ups the ante with better balance in the corners and less squat under acceleration.

The XP 850 moves the bar skyward – maybe even higher.

OUTLANDER: Before we met the new Polaris XP, we were feeling nothing but love for the Outlander 800R.

Its freshened Rotax V-twin is a welcome and significant upgrade producing incredibly smooth and easy-to-modulate power and its Visco-Lok 4-wheel drive system still redlines the appeal-ometer.

There’s no need for apologies from the Can-Am Camp. The Outlander 800R is a superbly executed, capable and powerful Big Bore ride no one shopping this segment can ignore.

GRIZZLY: There’s so much good in this Yamaha we felt really bad about giving it runner-up status again this year.

The improvements Yamaha has made in handling, ride and performance make the Grizzly 700 an absolute must-ride for any Big Bore shopper.

A torque laden 700 single that’ll make most 800’s sit up and pay attention combines with indigenous Yama-quality that simply cannot be undervalued.