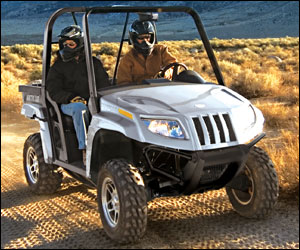 Arctic Cat’s Prowler gets the nod again this year as a result of delivering exactly what the market (and we) wanted. The Prowler platform caught us off guard a year ago with its bigger-than-Rhino dimensions and sporty DNA.

Last year our only complaint was we felt more juice was needed and it’s been delivered for 2008 with an increase from 650 to 700 ccs. The power injection (literally) comes from Arctic Cat’s St Cloud, Minnesota-built 695cc fuel injected, twin cam single.

The Polaris Ranger RZR is a breath of fresh air in the Side by Side category and may just be a predictor of things to come in the future.

There’s no argument it leans full tilt toward the high performance end of the market and offers a lot less for the utility buyer than the competition. In fact, the RZR is pretty much incomparable with its narrow stance, long legs and potent 800cc twin powerplant.

If we had a category called Best Pure Sport UTV, guess who’d win.

Yamaha waited a long time to add more vitamins to the popular Rhino. We’ve had a chance to run the 700 EFI powered Rhino and can say the wait has been worth it.

The new mill injects the UTV market sales leader with more of what it’s known for – sporty fun.

We have to wonder how long it will be before Yamaha does what the aftermarket has been doing to the Rhino for years – offering a full-on competitor to the Ranger RZR.