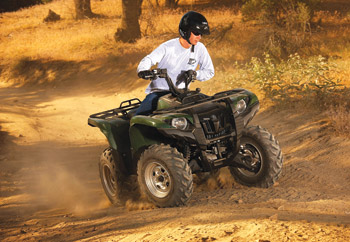 Okay, you’re wondering how the Grizzly 550 wins the BIC but not the shoot-out in this issue? The answer is: proven performance!

BIC Awards are bragging rights for the OEMs. More importantly, they’re strong indicators of our endorsement for purchase to our readers.

The Yamaha Grizzly 550 is a stellar ATV offering great handling and ride in combo with a stout, torquey and efficient EFI 550 single.

Availability of power steering and some of the nicest looking LE version plastic ever adorning a Yamaha make this ATV impossible to ignore. The weight factor is another thing we simply can’t ignore.

Despite its extensive feature list, the Grizzly still tips the scales on the razor’s edge of 600 lbs. Amazing! Here’s the kicker – we’ve been running a 550 since early this year and we simply cannot hurt it.

SPORTSMAN: There’s too much that’s new, fresh and pacesetting here to overlook.

From its high mounted radiator to its waterproof rear storage compartment to its motorcycle-like ultra narrow seat to its 14-inch wheels, it doesn’t matter where you look on the XP, there’s new ideas and innovation.

If another ATV possessed half the new technology the XP carries, we’d call it revolutionary. As it is, the 550 bristles with new tech. Prepare for copies to emerge.

KINGQUAD: Last year the 450 KQ took the BIC award. In only one year this class has seen tons of new engineering and features.

The KQ 450 still shines in our books. Using a full-on KingQuad 750 chassis, the smaller version produces exceptional power from its EFI 4-valve mill.

Nice features abound including a multi-plate rear disc brake and shiftable/lockable 4WD. Suzuki did the right thing when it used its 750 platform for this 450. Just ask Yamaha.