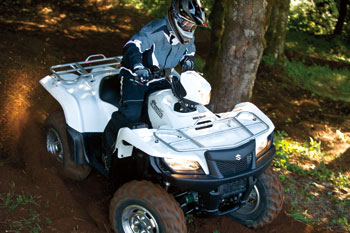 So far, Suzuki has kept things fairly simple and, with last season’s bump up for its biggest KingQuad, the 700 became the 750. The jump was actually only 27ccs, gained with a crankshaft stroke increase, bringing total displacement to 722ccs.

Even with this upgrade, the KQ needed more neon to get consumers’ attention. We’d be dead wrong to imply the addition of power steering was just lo-cal dressing and not Grade A beef. It has made a significant and noticeable change to the KingQuad.

But first, the engine: Whenever there’s a stroke increase, even a small one like this, it changes the engine’s power curve so that torque numbers are enhanced.

The original 695cc single had a reputation as a low-end tugboat. By adding to the torque sum, the KingQuad’s personality changed from exceptional to incredible, especially on the trails.

Now, when the throttle is tipped-in off idle, the KingQuad feels more willing and delivers more immediate power to lift the front wheels over obstacles. Although top speed is pretty much the same, this EFI engine likes its clutches more and shifts up through the tranny harder – a really nice benefit, especially in the mid-range.

With its new power steering system, Suzuki has been able to soften the reaction to off-camber hits from rocks and deep potholes. The nice thing is there’s still ample steering feel and the often-numb handling of ATVs with power steering has been cancelled out.

Its electric motor driven steering ram and gear set is connected to an electronic control unit. This ECU receives signals from. It means, if the tire contacts an obstruction, one of the sensors, the Vehicle Speed Sensor, detects the change in wheel speed and sends the info back to the ECU. The ECU makes adjustments to the steering ram and the feedback is compensated for.

Same thing happens at the handlebars. If an impact is about to tear the bars out of your hands, the ECU picks up data from a sensor on a torsion rod inside the steering mechanism and makes adjustments.

Unlike some of its competitors’ EPS, this one is truly calibrated for the nuances of off-road riding and offers, not only the comfort of steering ease but, also, active protection from big hits.

The KingQuad AXi is one tight package and deserves serious ogling before you make a choice in this class.

Dirt Trax Onlinehttps://www.atvmag.com
Check back frequently for new content and follow us on social media!
Previous articleITP Rolls Out Another Winner
Next articleYoshimura’s Doug Gust Podiums at Sunset Ridge