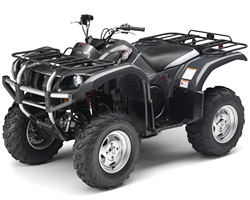 It would seem logical Yamaha would drop a detuned version of the 2006 Raptor 700R’s EFI mill into an updated Grizzly platform.

The fit would be a no-brainer and the improvement in drivability and performance would be substantial. However, we’ve got to ask ourselves if Yamaha would be swinging a big enough bat at the competition with this change alone.

Thus far, among the big Japanese OEMs, only Kawasaki has used a twin cylinder engine in its Big Bore models, and it’s been a huge success.

We think it might be possible Yamaha will step up with a bigger-Big Bore and bring a V-twin mill in the 800-850cc range to the market.

Whatever Yamaha has coming in this important segment, don’t look for the current 660 Grizz to go away. The current 660 still holds title as one of the best selling Sport-Ute models anywhere on dirt and competes amazingly well against some pretty new and radically improved models.