Can-Am All About The Beef 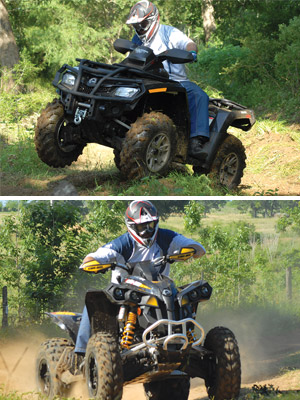 The current Outlander/Renegade 800 V-twin mill generates a claimed 62 ponies – the most in the biz, until a year ago. While Thundercat dyno estimates are vague, we suspect the Thundercat’s V-twin produces about 70hp.

The real issue with the T-Cat, though, is the spread of power and the way the mill lays down those ponies. It’s silky smooth, far from intimidating and easy to ply. In contrast, the original Outlander 800HO pretty much rammed power into terra firma in a way best described as violent.

Rotax is a formidable purveyor of power and when called upon, rarely under-delivers. No sooner did the Big Phone from Valcourt ring in Austria than crates came sailing back filled with a new version of the 80-degree V-twin we’ve come to know and love.

With the first squeeze of the loud handle we noticed a dramatic change in power delivery. In fact, we thought the new R felt less powerful than the former HO. Not true, of course, however, our Butt-o-Meter keeps telling us the new OL and Renny feel less intimidating at trail speed.

Here’s the twist: we found ourselves able to generate and carry more speed on trails as a result of reduced wheel spin from the R’ s torquey, more linear power delivery.

Once into a clear area with nothing but open fire road ahead, the R proved its point. There’s a least 70 stallions between your legs. Oh, and by the way, it feels mighty good.

We give solid approval to the new “R”. This is a much easier-to-ride yet unrepentantly fast powerplant. We think buyers will appreciate the more balanced delivery in tricky situations, particularly 4×4 runs when traction is elusive.

Twisty woods runs and tight bush trails will be easier to navigate while the transition from trail speed to fire road thrust is now mostly seamless. It’s interesting to us how both the new “R” Can-Am and the Thundercat deliver power much more suitable for trail speed navigation than some ATVs with considerably smaller engines.

All versions of the 2009 800 Outlander R come with new front fascia which includes a new bush bar on the XT and a more appealing look to the headlight and grill area. Other V-twin powered Outlanders (650 and 500) do not get this aesthetic touch up.

Dirt Trax Onlinehttps://atvmag.com
Check back frequently for new content and follow us on social media!
Previous articleBallance, Cecco and Ockerman Dominate at Ironman
Next articleTJD Now Distributed By Tucker Rocky