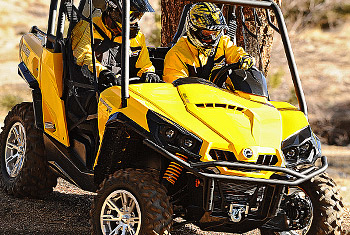 To say the all-new Can-Am Commander has been long anticipated is an understatement; this is the most talked about new SxS vehicle this model year. Can-Am has been working the press for over 18 months with tiny information teasers in advance of the Commander’s arrival.

The new Commander is both fast and powerful. Even in base trim and when equipped with the smallest available Commander powerplant, the potent 71-horsepower 800R V-twin currently used in the Can-Am Outlander, it’s still a rocket.

The 800R Commander is capable of pulling even with the current crop of mainstream RUVs including Arctic Cat’s 75-hp XTZ 1000 and Polaris’s Ranger RZR S 800HO with 65 horsepower.

Here’s the bad news if you own one of the competition’s horsepower cannons. The Commander is available with an optional 1000cc 85-horse V-twin reactor and it’s capable of propelling the Commander in a way only professional desert racers experience when belted into a race-prepped SxS. For sure, we’ve never ridden any SxS that comes close to the wheel shredding power and thrust of the Commander 1000. Nothing.

Even though the Commander X will occupy the Pure Sport designation along with the RZR S, it can do more. It’s fully a utility UTV equipped with a unique dual mode dumping cargo box with two tailgates! The box has a false floor and opens to Big Gulp dimensions. With 85-horsepower on tap, hauling top soil becomes immeasurably more interesting.

The Commander is also an ergonomic homerun, featuring the nicest seats in the biz – removable for use around the campfire. The steering wheel and instrumentation tilt in concert and the control placement is superb. A drive-by-wire throttle allows for two separate throttle response programs and a 10-mph limiter if the driver’s seatbelts are not fastened.

There’s much more to say about the new Commander, and you can be sure we’ll be saying it in All-Terrain Vehicle Magazine and on Dirt Trax Television over the next few months.