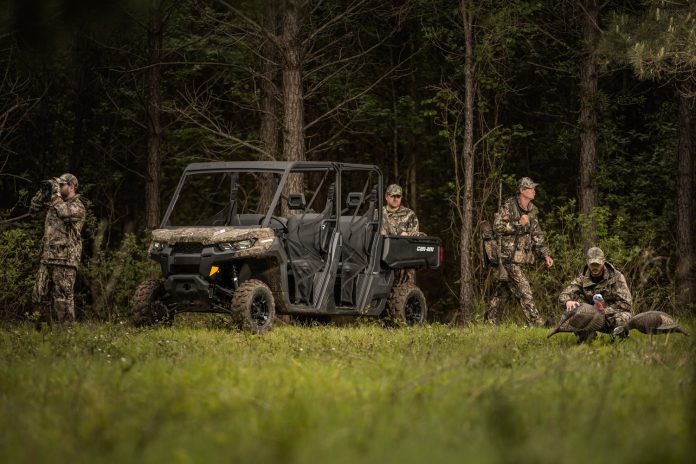 Several years ago, when Can-Am introduced its Commander line of Side x Sides, it seemed like a good idea to focus primarily on the performance side of the market, building a semi-utility vehicle that could also haul bootie for recreational use.

Can-Am had a long time to dream about how the ideal utility SxS should look and perform. The huge workplace market gap BRP had been missing could now be filled with a vehicle that, when its elements were combined, had the potential to knock the Polaris Ranger off its long-held pedestal.

With these three well-developed and mature assets in hand, Can-Am set out to design a workhorse that could rock the utility world.

The 800 and 1000 Defender V-twins are not the same engines you’ll find in a Commander or Maverick. The core engines are essentially the same, however both versions have been considerably detuned for less horsepower and amped up for way, way more torque.

The difference is all about power curves and even more about the application of torque at extremely low RPM. The Defender is a lugger and not a revver. It is intended to and was designed to haul incredibly bulbous loads of materials, carry six meat-eating adults at once and slog all that through hideous, sticky terrain without coughing blood.

Can-Am calls the Defender’s version of its CVT tranny, PRO-TORQ and it’s a term used to describe a modified set-up designed for lower clutch engagement and strong pulling power at low RPM. Combined with the industrial version of Visco Lok QE (quick engagement) it means you are literally in locked 4WD in the blink of an eye as conditions demand it. No switches or levers are needed to lock the diff; it simply senses the demand and locks itself using a viscous coupling.

Any vehicle targeted at carrying extreme loads needs a suspension designed to handle it. Up front, the Defender Max uses rather conventional twin tube gas cell shocks and double A-arms with 10-inches of travel. You’ve seen that before but Can-Am’s Dynamic Power Steering system has been calibrated for utility use, meaning slightly less effort at static ranges and then improved feel at the wheel at low speeds and less assistance at higher speeds.

Out back, where the bulk of the weight bias will be felt, the Defender utilizes a version of the Torsional Trailing Arm design called TTA-HD. This heavy duty version uses beefed-up arms and a pair of gas charged monotube shocks calibrated to work with heavier loads.

The real benefit of the TTA system is its near-erasure of any scrub at the rear wheels as the 10-inches of suspension travel moves from full extension to full compression – especially nice when you’re carrying a full cargo bed and three people over the rear wheels.

Ask any utility consumer and they’ll tell you the most important ergonomic feature of any SxS is interior comfort. Next will be storage and last will be electronic gizmos.

Can-Am has focused on legroom and ample seating with the Defender and there’s enough storage onboard to shame an IKEA cabinetmaker. The full 3-passenger benches have flip-up features for extra storage and flip-down foldable armrests for comfort and coffee cup stowage – just like a Ram 1500.

In the dash panel there’s a built-in 6.3 liter toolbox and various roomy cubbyholes for all kinds of storage. We especially like the steering wheel design and the shift lever works flawlessly – maybe the best in the industry. If you don’t think that’s a big deal, try plowing snow for an hour-and-a-half sometime.

Can-Am has also made it super-easy to install add-ons like a windshield, doors and a roof using BRP’s own custom-built accessory stuff.

It’s worth noting, the Defender brags the best cargo capacity in the biz with 1000-lbs in the box and nifty indents on the bed’s floor so you can haul 5-gallon pails around without them shifting and sliding around all over the place. Nice touch.

Without question, Can-Am saw the Polaris Ranger as the Defenders target and, in order to get the attention of utility customers, it had to build a vehicle that could exceed, not simply match its competition.

We think the Defender is an excellent shot at the enemy and, for those who pay it some close inspection, it will truly impress them.