Do You Have A Back-Up ATV? 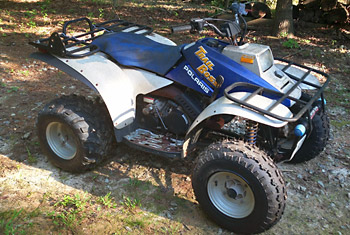 How many of us have a spare ATV sitting around just in case we have problems with our main one?

Many will say, “I wish I could afford one good ATV, much less a second!”, but if you have the chance, getting a fill-in could be handy if you’re willing to work on it.

I recently bought a run down Polaris Trail blazer for $100 and it might have just barely been worth that.

It had a broken belt, broken air filter box and the brakes were completely seized. The CVT cover also has a huge gash in it so water crossings are a no go and the engine had been sucking in just about anything so it’s possible the cylinder may need some fresh sleeving as well.

I bought the belt and cover as well as some carb cleaner to try and get it moving on its own. Altogether I have about $350 in the quad so far and I’m looking at an additional $250 to get it running and able to stop.

Normally I wouldn’t spend so much time on anything like this, but I have several buddies who like to ride and don’t own an ATV. So if I loan this beast out I’m not out too much money if something happens to it.

It may not look like much, but it’s a four-wheeler for those times when you want to just ride and don’t really care what. Plus, that one friend who never has anything to ride can finally come hang with the crew.