DON’T GRIPE IF YOU’RE PAYING LESS FOR YOUR ATV 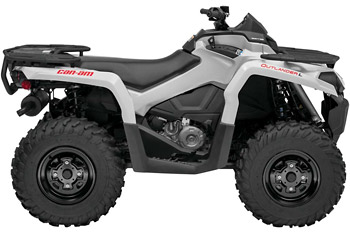 We get a chuckle when we hear people complaining about how stripped-down some ATVs and SxSs are when those same vehicles are directly targeted at a market looking for lower prices.

We recently heard someone say the new Can-Am Outlander L series ATVs should have kept their composite racks and not added the tube steel ones they currently come with.

Same goes with the L’s lack of a DESS security system and its downgrade to less pricy shocks. “I think the L is a good idea but they shouldn’t have taken so much stuff off it.” Well, duh, how do you think they got the price so low!

One of the largest selling ATVs in the history of 4-wheelers was the Polaris Classic 500. This budget-priced ATV used “old” technology like a McPherson Strut front end and a long-established 500cc single to attract more buyers than you can imagine to Polaris showrooms.

We know riders who have 10-year-old versions of this steadfast ATV and don’t want to trade up, they love the thing so much.

It didn’t hurt a bit that the 500 Classic had an unbelievably good ride, handled well and had plenty of power for both recreational and utility use.

It’s like that with the Outlander L 450 and 500. Even though there’s been several layers of goodies peeled away, it’s still essentially a very good performing, well equipped ATV and thus, represents real value in the marketplace.

Don’t gripe about the feature list; you could just pay more and get the other stuff!